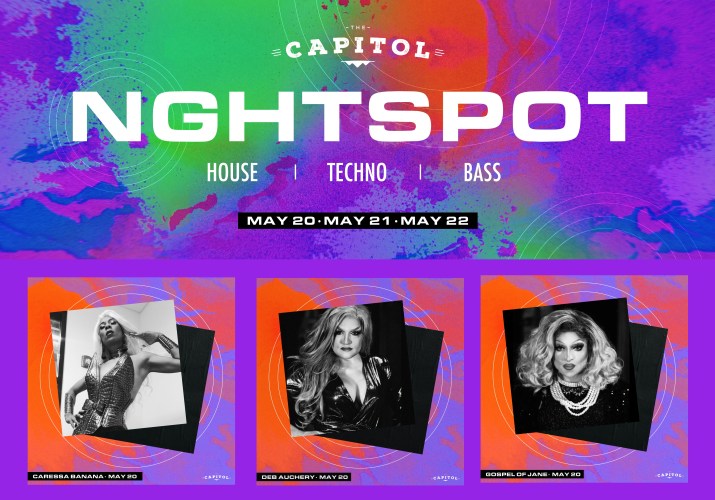 Friday – May 20th –
Third Seven is the stage name for Billy Mickelson of Bend, Oregon. Billy has played music his entire life but has been performing music professionally full time since 2008. Performing all around the world, (from Europe and beyond…) he knows no bounds. Billy has performed everything from yoga classes to punk rock shows and absolutely everything in between. Third Seven uses looping and layering of cello, rhythm and vocals to create unique atmospheres for his audiences to get lost in.
– Third Seven
– WELTERWEiGHT
– Codi Carroll
– <3<3
– Mad Scientist
2 Epic Drag Show Performances
(10:30PM & 12:45AM)
– Deb Auchery
– Gospel of Jane
– Caressa Banana
Saturday – May 21st –
Russ Liquid is continually putting out new music and has quite a few releases up his sleeve, and creates a joyful sense of synergy in his high-powered live shows, with appearances including Shambhala Music Festival, Lightning in a Bottle, Summer Camp, and Sonic Bloom, among others; no matter the setting, a clear multidimensionality can always be heard in his projects. “I want to make people feel good but also give them something to reflect with,” says Scott. “It’s not about just making party music or music that’s more introspective—it’s for the full gamut of human expression, and I want it to be just as dynamic as life itself.”
Redefining the possibilities of modern music, Russ Liquid fuses the raw vitality of classic funk and the inventive sound design of electronic production, bringing a much-needed injection of melody and emotion to the thriving dance floor community.
– Russ Liquid
– Torbjørn Feat. Nurries
– Gold·ish
– DJ Action
Sunday – May 22nd –
DJ Wicked has been a staple in the Northwest Hip-Hop scene for more than a decade. Wicked has showcased his talent both nationally and internationally at a number of high profile music festivals. DJ Wicked is hosting a number of DJ residencies in the Portland area (including the legendary “WICKED WEDNESDAYS”), as well as performing at clubs, concerts, and DJ events around the globe.
– DJ Wicked
– Daivya
– Mark Brody
– Scipher
– Glow Vibez