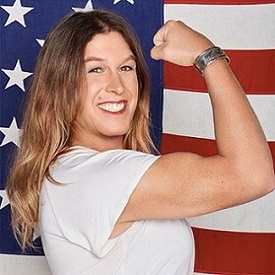 Check out all upcoming events here

Join us for an evening of great film and conversation with Kristin Beck. The night will begin with the showing of the CNN Film “Lady Valor: The Kristin Beck Story” and will continue with a talk by Kristin, questions and answers and great photo opportunities.

A little about Kristin Beck…

Christopher T. Beck, served twenty years in the U.S. Navy SEALs, taking part in thirteen deployments, including seven combat deployments. Beck was a member of the United States Naval Special Warfare Development Group (known as DEVGRU) and SEAL Team Six, a special counterterrorism unit. Beck is highly decorated, having received a Bronze Star for Valor for heroism in combat, two Defense Meritorious Service medals, and a Purple Heart. From the boots on the ground search for Osama Bin Ladin to the high heels on the ground work for gender awareness – Beck has been a leader.

Retiring from the Navy in 2011, Beck took a brave step forward toward a new future. After suffering with lifelong gender dysphoria, which contributed to his inability to emotionally mature while being in a male body, Beck began her transition by dressing as a woman. She changed her name from Christopher to Kristin, and in 2013 started hormone therapy, preparing herself for sexual reassignment surgery.

Since coming out in 2011, Kristin Beck has addressed the Pentagon, been a guest speaker at colleges and events throughout the country and has been a guest Grand Marshal for Pride celebrations.

For a great article, check out: https://www.gq.com/story/kristin-beck-transgender-navy-seal

This site uses Akismet to reduce spam. Learn how your comment data is processed.